There is some myth going on around the pet owners, between dogs and fruits, especially raspberries. The myth says that raspberries can kill dogs, due to its toxicity. Nevertheless, researchers are creating true theories that debunk the myth. That being said, until now, there are several theories between dogs and raspberries every dog owner should know; can dogs eat raspberry? Is it killing my dog?

Can Dogs Eat Raspberry on Daily Meal? Is It Safe For Them? 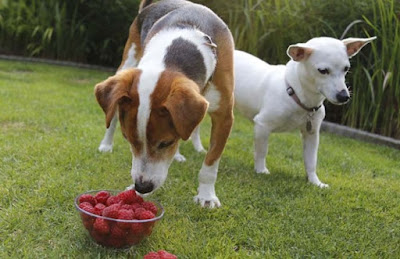 Dogs are omnivores. This means they can eat not only meaty meals but also the super summertime fruit, raspberries. As a fruit, it contains the very least toxic that can harm your dogs, and it is safe to eat.

Yet if you are about to feed them, try to make it from a very light portion as doing some moderation, such as less than a cup, and then a cup, and keep going. And also, to be underlined, berries should not be dogs’ main meal and food, instead, they should only become some treats and snacks that are not given regularly.

Raspberries contain lots of healthy and useful nutrients humans and dogs need. Especially for its massive vitamins that are good for the immune system. Raspberries are also enriched with minerals which are good for dogs’ growth, teeth, bones, and other body parts. Last but not least, they also have fiber and antioxidants.

A Right Number of Raspberries Dogs Can Eat

Sure, we agree that dogs can eat raspberries. But do they have an exact number of how much can dogs eat raspberry? Is feeding too much on raspberries can be dangerous?

First, you have to understand that in each raspberry, there is a natural sweetener called the xylitol. Xylitol however should not be consumed in a high amount, due to its ability to make a dog have liver disease and hypoglycemia. In short, too much xylitol is a hazard for dogs’ tummy.

Noted that in every small cup of raspberries, there is at least 0.05 g xylitol. Meaning, to avoid hypoglycemia as much as possible, a 10kg dog should never eat more than 3 cups of raspberries at a time.

Not only xylitol, but raspberries also have an old sugar, mostly known as a fruit natural sugar, or fructose. Fructose is not necessarily as bad as the sugar we consume at home, but as the world evolves, the amount of fructose in modern fruits is also increasing far rather than the ancestors of the fruits, which can cause obesity for your dog.

Furthermore, never feed your dogs with canned raspberries, or maybe raspberries jam. The manufacturer of fruit jams usually puts more sugar into it to make them even sweeter, and it is not good at all for your dog. Instead, it can result in faster obesity and liver disease more than xylitol.

That is why, as a dog owner, you should watch the number of raspberry cups you are feeding to your dog.

But still, raspberries have lots of nutrients in it that are good for your dogs. For example, are these:

These minerals and vitamins fortunately bring good impacts to dogs, both mentally or physically. For an example of their benefits to dogs are:

What Raspberry Menu Is Tolerable for Dogs?

A menu is important, since dogs, especially the picky eater ones. Because they sometimes can be hard to feed. Here are some examples of dogs’ menu with raspberries.

And, that is it! Myth versus facts about the confusion of “can dogs eat raspberry?” Now you have your answer!